While most of us utilize our time, money and skills for our personal benefits, it gives us immense satisfaction when we spare some of our day to do a little for the society and for those in need. Yes, we are talking about volunteering. Though one may naturally assume that only the receiving party is benefited from volunteering, the giver (read as volunteer) gets back something in the form of advantages to his or her physical and mental well-being. Carnegie Mellon University undertook a study sometime back to identify the correlation between volunteering and physical/ mental health of the volunteers; the results were no less than an eye opener. It showed that regular volunteering can lead to lower chances of developing hypertension and promotes psychological well being. Has reading this awaken the volunteer in you? If it's a yes, than Chezuba is the perfect platform for you to explore. Chezuba lets you offer voluntary services to NGOs from around the world so that you can make a positive difference in the lives of people across the world, all from the comfort of your home.
StartupTalky interviewed Chezuba co-founder Sukhendra Reddy Rompally to learn more about this unique startup.

Based in Hyderabad, Chezuba is a global online volunteering platform bridging professionals worldwide with assisting Non-Profits through skill-based online volunteering. It makes volunteering incredibly easy, accessible, and fun. Chezuba envisions a world in which anyone and everyone can make an everlasting impact without the need to relocate or travel.

Volunteering and philanthropy as a whole is an unorganized market. More than one-fourth of the world’s population volunteers every year and hundreds of billions of dollars are given as largesse. A recent Forbes report suggests that 72% of skilled professionals seek positive impact in their work and more than two-thirds aren't able to do this.

“We aim to organize this market by channelizing the 10 million registered NGOs and bringing them together with corporates, skilled professionals and the governments. As the newer generations march towards reaching higher in the Maslow’s pyramid, we foresee the whole world engaging in community development activities”, Sukhendra explained.

Sukhendra Reddy Rompally is the CEO of Chezuba. He is an IIT Dhanbad graduate. He founded AIESEC IIT Dhanbad and led a team of 50+. Sukhendra worked as Product Manager, an international BD and HR in Russia, Taiwan, and India. He also volunteered in 4 countries.

Jagan is the COO of Chezuba. He too is a graduate from IIT Dhanbad and co-founded AIESEC IIT Dhanbad. Jagan worked as pan-India BD manager and established the sales and operations processes for a startup. He is also an active volunteer with activities in 3 countries.

Adela is the CXO of Chezuba. She Worked with multinational teams in China, Taiwan, and Slovakia. Adela has master’s degrees in Sinology and Arts Management and 6+ years of public service experience in foreign missions. Adela has volunteered in Taiwan and India.

Jagan and Sukhendra have represented the Jharkhand in the National Squash Championships while they were studying together. They have been friends for close to 9 years now and Jagan was the first person Sukhendra approached when he wanted to start Chezuba. Adela and Sukhendra were flatmates during their work stints in Taiwan. At the time when Sukhendra was contemplating about a volunteering based startup, Adela was actively looking for volunteering opportunities abroad. The idea was a perfect match and instead of working for a non-profit, Adela joined the founding team to aim for a bigger impact. The three have attracted great talents from various backgrounds that over a year and a half has grown into an 18-member dedicated and passionate team.

After Sukhendra’s first volunteering experience in Malaysia, he cofounded AIESEC ( Nonprofit Organization Management Company) at his alma mater IIT Dhanbad with Jagan. Those 3 years at AIESEC opened up opportunities for him to volunteer in India, Malaysia, Russia and Taiwan. However, once he entered the corporate world, he realized that time, location and opportunity constraints were hindering interested individuals to contribute as volunteers. Sukhendra's brewing idea was bolstered further during a backpacking trip in Myanmar where he met several other young professionals from different countries, faced similar hindrances. That was the Eureka moment.

After he came back to India, he discussed the idea with a few friends who loved it and joined hands either as co-founders or investors, and the venture came into existence!

The business plan of Chezuba was laid out at the end of Sukhendra’s backpacking in Myanmar. The first word he heard after landing in Myanmar was “Chezuba”, which means “Thank You” in Burmese. He found it relevant to his idea and  was quite catchy too; without wasting any time, he checked for the domain availability and voila! The startup got its unique name.

The logo was designed by Adela. It represents a hot-air balloon in front of a blue globe. Hot air balloons over Bagan make up the most famous landmark of Myanmar; they are laid out in the shape of a heart—a symbol of love or doing good.
“We hope that our minds, skills and hearts can travel to the other part of the world via “air” (online) as the balloon”, Sukhendra narrates the deep philosophy behind the logo.

Chezuba connects NGOs and volunteers from around the world. Non-Profits who need skilled volunteers sign up on this platform and complete their profile. Chezuba conducts a first level screening of such Non-Profits. The Chezuba team then understands the Non-Profit’s case and recommends what volunteers they might need; assisting them in creating online volunteering projects on Chezuba. The company uses digital marketing and partnerships to find them the right volunteer.

A volunteer signs up, creates a profile, and explores the existing projects. Once he or she finds a project of interest, they go through an application process which tests their intent, skills, and understanding of the project. These data points are shared with the NGO responsible for the project so that it assesses the candidate for determining whether he/she is the right fit.

In the process of providing truly impactful experiences, Chezuba has also partnered with several organizations that let the volunteers contribute through other means— raising money for the partner NGOs through crowdfunding, running, corporate volunteering, etc.

Once the initial team was in place, the members raised a small fund from colleagues, employers and friends, launching the first product in March, 2018.
“We received a lot of support from millennials worldwide as we had users from 50+ countries in the first 10 days of our launch. A friend got us featured in the French press and a user who came across us offered to engage with us and wrote articles and blogs about us in Nicaragua. By the end of the first quarter, we had users from 100+ countries, most of who came to us organically”, Sukhendra recounts.

Chezuba earns revenue from three sources-
The NGOs which pass the initial screening of Chezuba become eligible to list their needs on the platform. Such NGOs pay an annual subscription fee of US$ 100 which lets them post any number of projects online, related to any skill.

The company has a crowdfunding partner which lets volunteers raise money for the partner NGOs through social media and affiliate channels. Chezuba charges a commission of 2% on the money raised.

Chezuba also engages corporate clients and finds customized, online volunteering opportunities for the senior management in those companies. The company charges 50$ per employee in such cases.

Chezuba has raised three rounds of investments so far.

The investors are a great support to the Chezuba team not only in terms of finance, but also for mentorship and guidance. As Sukhendra puts in, “We were very lucky with our investors not being only very supportive, but with some of them also providing extra value in terms of mentorship in their field of expertise. As we are on a lookout for a Pre-Series A investors, it is our strong thesis to choose investors that can add more value beyond money”

Chezuba has come up with some excellent strategies for building customer relations.
The company believes in building an ecosystem where customers play the role of business promoters. Chezuba engages customers in several innovative ways.
Speaking about the various ways in which Chezuba engages the customers, Sukhendra explains, “Our customers engaged with us as Regional Ambassadors, taking up short term research projects for us and even joining us full-time as employee(s). Listening to the customer is the key and we have made it a point to interact personally with as many customers as possible which eventually made them promoters of our brands. One of the biggest reasons for Chezuba’s exponential growth has been the network effects of our happy customers”

Technology has been the biggest challenge for Chezuba since inception.
Be it choosing a stack or hiring a team with limited budget, Tech has always been a challenge, adding to the fact that none of the founders are technical. However, the company plans to solve this issue by incorporating an in-house tech team soon.

Explaining the technical challenges Sukhendra says, “The product has been built from scratch by childhood friend Murali, who we got on board as our Chief Technical Advisor. A college junior of mine joined then as a developer and we hired a senior developer later. We heavily rely on our CTA and other mentors/advisors to temporarily solve tech, the permanent solution will be hiring a full-fledged in-house tech team, which is our first plan of action upon closing our Pre-Series A”

Catchafire in the US functions similar to Chezuba. They are a 9-year-old organization focusing on US based NGOs and corporates. On the other side, there is Vollie from Australia which is 2 years older than Chezuba and has a similar business model, but the focus being the Australian market.

However, Chezuba being a global platform has a wider scope than its competitors.  By working out of India, Chezuba’s pricing is an advantage for the company.

Chezuba caters to the needs of NGOs primarily in Asia and Africa, where volunteering is largely an unorganized sector.

Chezuba is growing every month on user acquisition at 32% and at about 52% on its revenue. Venturing out into corporate sales with bigger ticket sizes, the cash flow for Chezuba seems a lot more stable and the company is eyeing profitability in 3-6 months from now.

The company is currently in the middle of its first institutional fund-raise, which will enable it to focus on further productization and market expansion in Latin America and Africa. By the end of the year, Chezuba is expecting to cover over 4,000 Non-Profits and close to 50,000 volunteers, engaged with about 1,000 online volunteering projects.

Chezuba was recognized among the top 100 startups globally at Startup Istanbul -2018. It was also selected for the top 5 social impact startups at TiE Global Summit – 2018 and as one of the Top 50 Impact startups in India by Bombay Stock Exchange.

join 100k+ member from startup ecosystem to get latest updates to grow your startup.

Chayanika is an MBA in Finance and a trained Digital Marketer. SEO and content writing are her hobbies turned profession. She is a rover. In her free time, she loves traveling and cracking jokes.
Previous Post

How To Use LinkedIn For Marketing 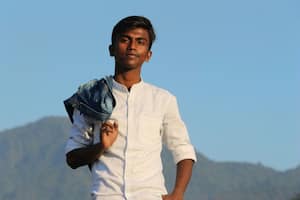 Next Education: Offering 360 Degree Edtech Solutions to the K-12 Segment

Startups Which Defined the 2010s | Indian Startups of the Decade

How to Improve Landing Page Conversion?